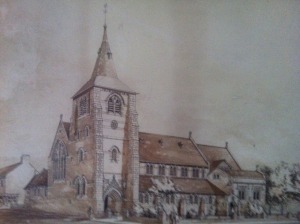 Design for Christ Church the tower was never completed.

Christ Church, Chester, is in Somerset Street, Chester, Cheshire, England. It is designated by English Heritage as a Grade II listed building, and is an active Anglican church in the archdeaconry of Chester and the deanery of Chester. In November 2011 it left the united benefice with St Michael, Plas Newton, and became its own parish once more. 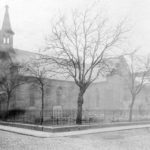 The church was built to replace an earlier church dated 1838 on the site which had been designed by Thomas Jones. It was rebuilt in separate stages by John Douglas. The chancel dates from 1893, the southeast chapel from 1897, the nave was completed in 1900, and the northwest baptistry was added in 1904. A southwest steeple was planned but was never built. The porch was built in 1936, in place of the planned steeple.

The chancel and the southeast chapel are built of sandstone ashlar and the rest of the church is in red brick with stone dressings. The roofing is made from grey-green slates. The style is Gothic Revival. The plan of the church consists of a five-bay nave with a clerestory, north and south aisles, a chancel, a baptistery, a southeast chapel, vestries, and a south porch. Over the porch is a cantilevered timber-framed hip-roofed bell cote. The gables have crosses as finials and the nave roof has five blocked lucarnes on each slope. 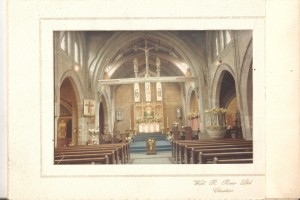 Sir Charles Nicholson designed the gilded reredos, the organ case, and the side screen, between 1900 and 1910, and the rood beam in 1920, and also possibly the gates to the chapel. The reredos in the chapel, dating from 1897, was designed by Kempe, its figures being carved by Joseph Mayer of Oberammergau. The paintings of 1910 on the organ screen are by Gertrude Siddall. Robert Hilton designed the bishop’s chair and a prayer board. There are two fonts, one probably dating from 1837, octagonal and in stone, and another dating from 1904 in alabaster. The churchwardens’ settles date from 1837, and were formerly in St Mary’s Church, Eccleston. Also in the church is a painting depicting Christ prepared for the Entombment by Westall, dated 1826, and which was an altarpiece in Eccleston church. There is a painting of Mary Magdalene, startled in a wood, by Herbert Gustave Schmalz. Much of the stained glass is by Kempe, including that in the southeast chapel of 1897, the south aisle of 1901, the west window of 1902, and outside the baptistery. Above the older font is a window by A. Hilton dated 1906, depicting an angel. The baptistery glass also dates from 1906 and is by A. K. Nicholson. The memorials dating from between about 1895 to 1917 consist of small alabaster plaques. The two-manual organ was built by Brindley & Foster of Sheffield.

© 2020 All Rights Reserved. Christ Church is part of The Church of England. Registered charity in England and Wales no. 1133808.